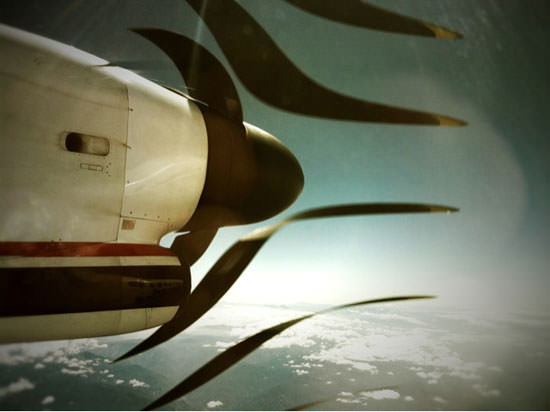 In the early 20th century, the photograph still seemed new. The German intellectual Walter Benjamin tried to understand how photography changed art: it replaced the “aura” of the masterpiece with a new, democratic way of making pictures. Going on for a century later, we’re living in the midst of a technological revolution that has left photography itself behind. Latest trend: iPhoneography. There’s a lot of video and photo apps that you can use to pimp up your iPhone pics, but it turns out that you can achieve great effects just by pointing a cellphone camera at a fast moving object, in this case , airplane propellers. The effect you see in the pics above is known as ‘rolling shutter’.

[I shot this with] an iPhone 4, and the scanning typically goes from top left to bottom right so moving objects lean to the left. Essentially any electronic shutter camera (i.e. not an SLR like mechanical shutter) will give these effects. Wikipedia has some good articles here: en.wikipedia.org/wiki/Rolling_shutterFor those who want to try this out, just point your simple electronic shutter camera at an object moving parallel to you, preferably fast, and take the photo. The faster the relative speed between you, the more the distortion. Rotating objects go really weird!

Thanks to Rob Sheridan for the pics and vid. You can check out his amazing Flickr stream here, and you can also follow him on twitter.