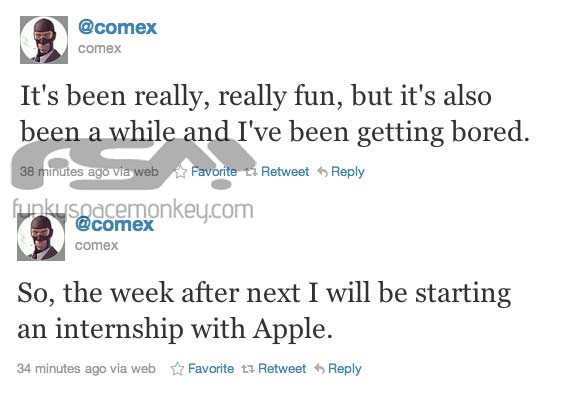 If you have an iOS device, it’s a must that you know the name ‘comex’ . Comex got into the iPhone jailbreaking scene back in 2010 with an untethered jailbreak called Spirit. A couple of months later, he released a new untethered jailbreak for all iOS devices running iOS 4 ( including  iPhone 4 ) called JailbreakMe 2.0 ( which we used to jailbreak an AT&T Store display iPhone 4 and to save its SHSH blobs – watch the video )

Recently Comex released JailbreakMe 3.0, an untethered jailbreak for iPad 2, iPad 1, iPhone 4, iPhone 3Gs, iPod Touch 3G/4G ( but really, it was always about the iPad 2 ), which we used in to jailbreak an iPad 2 in a  Seattle Apple Store – watch the video.

Unfortunately all good things will come to an end eventually… for some of us. Comex, is starting an internship with Apple next week.

Love it or hate it, this is a big step forward for Comex, and FSM wishes him only the best. Thank you for all your hard work, you made our lives so much easier and fun.